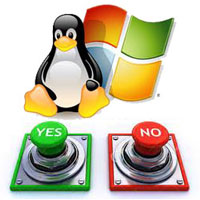 The war between Windows and Linux

The relationship between windows and linux is more than competition but a war in the OS industry. They both have numorous support and fans communities on the internet, they never stopped the discussion and comparison of their own advantages. Indeed, windows and linux are two of the most popular system on personal computer and hosting servers. Here I would like to share my personal opinions about the two and overview of the impact to actual web hosting industry.

Absolutely, the user friendly GUI is the biggest advantage of windows, you don't have to understand how the system actually works. You only move over your mouse and keyboards then you will be able to complete most of your works from a computer. Amusement is another fantastic and most popular feature with windows, you can play games, watch movie, listen music and do all kinds of graphic related projects.

As about Windows hosting. with it's powerful GUI configurations, you can setup a production server environment in minutes. IIS is the web server for windows hosting and almost all components come from microsoft directly. You always get support from microsoft if you got into any server end problem because you paid for the product.

For many web development softwares/tools, they're more available for windows server such as visual studio, adobe dreamweaver. Lots of linux programs are even developped through windows platform.

How about linux Hosting?

Actually, the life of linux is older than windows and windows is originally producted based on linux system. In this theory, linux can be called the father of windows. For older times linux system, everything is managed under a command line. No GUI, no beatiful colors but just a black screen with all kinds of commands. This should be the biggest barrier to introduce linux to everyone since they're forced to learn some boring commands in order to use the system.

For linux hosting, being the most popular choice currently, powering over half web hosting providers. Why? Simply because of the Linux GPL license and super stable performance. Everybody can get linux for free and customize it by yourself without any legal issue. You can always make yourself linux system and use it for any network purpose. If you're going to use PHP, Ruby, Perl, Python, or CGI scripting, Linux server will deliver with the best performance.

Windows vs Linux Hosting, which is better?

It's hard to say which is better since the both systems have large qualtity users, but linux is definitely more and more popular for it's fast development, linux also launched the GUI interface and make it more friendly to be accepted, you can complete most windows based works there and even more! As for windows, the biggest problem is about the license, you have to pay to microsoft in order to use it and many windows softwares are quite expensive. Due to the license issue, there're many pirated windows media all over the world.

Basically, there's no comparison in web hosting industry for windows and linux, they both have advantages for different technical aspects. Windows is a MUST for ms developers, but linux technologies is always portable to windows. For example the popular language script PHP can be working under windows as well as linux. So if you ask if to use windows or linux really depends your acual requiremtns. Windows+IIS is the best pack and Linux+Apache+Mysql is the most popular pack, if you like IIS web server under linux system then it's definitely not possible.

Since more and more hosting companies are based on pure linux so there're really many excellent linux hosting brands on the market, for safe and cheap, we highly recommend webhostinghub which is trusted by over half million websites.

If you're looking for some hosting companies for both windows and linux support, Arvixe is definitely the best choice. Arvixe offers the industry standard stuff such as websitepanel, cpanel, Latest Asp.net and PHP etc, arvixe is always our most recommended hosting company who offers reliable and affordable hosting services.

One thought on “Windows vs Linux Hosting”