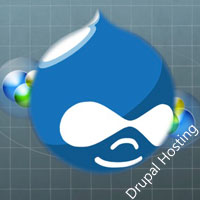 Drupal is a free and open source content management system (CMS) written in PHP and distributed under the GNU General Public License. It is mostly used for creation and management of diversity content such as news portals, FAQs, knowledge bases etc. Drupal is used as a back-end system by at least 1% by worldwide websites.

Whether you’re a blogger, growing business, or small mom and pop shop, Drupal offers a free, open-source hosting solution that allows you to organize, publish, and manage your digital content. With a versatile CMS that can be used for a wide variety of functions, Drupal has become a popular hosting and content management option for today’s growing businesses and web publishers.

Druapl requires very few from hosting server so it’s easy to get working for most hosting service. As the recommended service provider for Drupal, it’s quite important to stay up to date and support the latest versions of Drupal. Offering the most current version of Drupal is important not only for performance reasons, but also in keeping your site secure. That’s why Drupal pre-optimized hosting environment is crucial for web success, hosting server musth have Drupal pre-installed on your account with pre-configured the best security and speed settings taking the guesswork out of how to optimize your site! After reviewed 50+ reputable Drupal web hosting providers, best Drupal hosting is given to BlueHost based on their outstanding tech support for Drupal, leading server speed, uptime statistics, 100% risk free hosting plans and more.

Any Time
Money Back

How do we rate the Best Drupal Hosting?

The best drupal hosting are rated strictly through our live experience and years’ continous evaluation over 50+ drupal hosting providers. Besides the common web hosting prerequisite such as reliability and price, we focus on following extra check points.

Drupal Tech support – The best drupal hosting must be prepared with drupal auto installer in hosting control panel so people be able to setup the software by few clicks. Plus, their support team must be knowlegeable for drupal system and be able to offer fast trouble shooting over common problems. Webhostinghub and arvixe support people be able to provide development support as they’re actually sponsering the project directly.

Web Server Performance – Drupal is a powerful by little complex cms for novice. You can’t expect a drupal site will be running as fast as a simple php page. However, the speed can be improved greatly via a drupal optimized hosting server with guarantees CPU, memory and disk I/O resources for every user on every server with burstable abilities. Each customer account is isolated in the space with guaranteed resources & security.

Risk FREE – The best drupal hosting provider must offer at least 99% uptime guarantee plus some free trial periods or at least 30 days FULL money back guarantee. You can’t bound to a service that will not give you money back even it’s not working for you!

Drupal is compatible with both windows hosting and linux hosting, it can be successfully running on both Apache and IIS. Your server need php5.2+ and Mysql 4.1 or higher configured. So most hosting provider could be able to support drupal site. LAMP environment (Linux + Apache + Mysql + PHP. LAMP) is hihgly suggested for best drupal hosting choice. No matter for monetary or tecnical skills consideration, Linux hosting should always be the primary choice to get your website success.

Unlike early times when we have to setup everything by ftp uploading, drupal now can be installed in multiple ways via different installers. The popular simplescripts, softaculous etc are implemented by almost every hosting provider.

Why You Need Drupal for Web Development?

Drupal is often compared to Joomla!, WordPress and Concrete5, but each of these platforms have subtle differences that distinguish them from one another. Drupal’s strength lies in its robust architecture and scalability.

As such, Drupal is best for websites expected to grow significantly in size or traffic volume, making it the CMS of choice for large media clients, brands, universities, and ecommerce stores. In fact, many government sites also utilize the Drupal framework.

Drupal is also known for its high degree of flexibility, allowing companies to easily run a wide-range of scripts from a single Drupal installation. While it isn’t designed to support web apps like Joomla!, some Drupal users choose to install it and set it up to do just that. Sure, you could go with WordPress if you’re simply in need of a blogging platform, but it lacks the ability to scale like Drupal.

The Development and Growth of Drupal

As mentioned earlier, the Drupal host source code was originally intended as an application for internet forums. The open-source CMS platform was founded by Dries Buytaert, who now runs Acquia, a company of 300 people that specializes in providing Drupal support. It was this very company that helped transition the whitehouse.gov site to the incredibly scalable Drupal platform.

Despite its humble beginnings, Drupal is now used by over two percent of websites across the globe. While open-source, it’s owned by the Drupal Association, a non-profit organization devoted to promoting the platform.

In terms of its use on the web, Drupal is made to support vast amounts of content. With Drupal, companies can index custom content types and display them in a multitude of ways, rather than being limited to the constraints of typical ecommerce and blog formats. This is why so many businesses are adopting Drupal for their hosting and content management needs over more traditional alternatives.

With so many positives, choosing Drupal to power your website might seem like a no-brainer. However please keep in mind that PHP skills for complex functions are required when using Drupal.