Either we're playing as web developer or pure internet surfer, it's necessary to learn about the statistics of various internet services. In this article I would like to talk about the latest report of Top Web Server Market Share and the stats of serveral popular service. For example, how many new websites borned? How many emails sent? How many global internet users? You will get answers in this article.

In January, Netcraft made a survey for over 582,716,657 sites. Apache got the largest increase for serving hosted  domains, almost 60% web server market being occupied. The Microsoft IIS got further drop in market share but it's still  the secondary most popular web server solution. On the other hand, Nginx has the fastest growth among all web server softwares. By serving over 1.9M active sites, it's growth rate even overtook the Microsoft's. 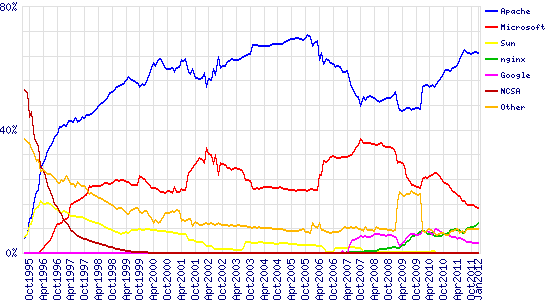 The stats are generated by Netcraft. For further report, you can visit this URL for details: http://news.netcraft.com/archives/category/web-server-survey/

Here's the data of some popular internet stats