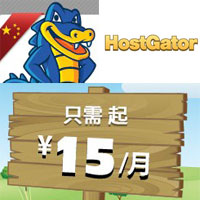 Finally, Hostgator launched their Chinese version support. If your business is located in China and looking for leading web hosting support to business, now you have more choice from a leadership provider. This article provides in-depth guidance of hostgator China hosting like plan features, price and comparison to US site. We also provide a basic FAQ for quick understanding.

On May 15, 2014, the hostgator news center announced their new business expansion in China – a completely new design with Chinese language and style. Like any other language specified sub site, hostgator China is dedicated for Chinese speaking clients with local support. In general, it comes with all server plans and features on original site but with different support features.

Hostgator China provides shared, VPS, Dedicated and reseller hosting plans which is the same as mother site. Further more, they added HK server option to follow local market needs. Based the difference between US & HK, plan technical features and price are adjusted accordingly.

Shared Hosting – Available for both linux and windows solutions. However, some technical features downgraded comparing to its mother site like number of supported domains, sitebuilder service etc. The Chinese version is simplified a lot or maybe more features being developped but not yet published. At the meanwhile, their standard 45 days money back guarantee reduced to 30.

VPS Hosting – Similar but also simplified for some features like supported IPs, it is 2 on mother site plans but only a single IP supported on Chinese version. Also, the vertualization technology is not specified here and no promotion offered.

Reseller Hosting – Similar but some difference on disk and bandwidth allocation. Also, free whmcs is included for all reseller plans on mother site while not supported for copper plan on Chinese version.

Dedicated Server Hosting – Only linux server provided at the moment and cpanel is not included for free. There's steps to configure your server during sign up process and you can choose control panel service and storage service.

Generally, much better price is offered on Chinese version site. For example, the basic shared plan is offered at $3.96/mo, after default 20% discount then deducted to $3.168/mo. On Chinese version site, the basic plan is configured at ￥15/mo(about USD2.5). Similar for VPS, reseller and dedicated plans. But please be noted their price for Hongkong server is a litte higher.

It's launched on May 15, 2014 with another partner site – hostgator russia

Where is the headquater of hostgator China?

It's still the same server from USA data centers but just offered for Chinese support. They also partnered with Hongkong data center service.

Not at the moment, their official business time is am9:00 – pm17:00, but with our observation, their support is always started later. Currently they provide support through QQ chat, Hot line phone calls and helpdesk ticket.

Is there any coupon code available?

Seems not, the registration procedure is different than mother site. You have to register an account first in order to sign up hosting service.