Home / Hackulous is Shut Down 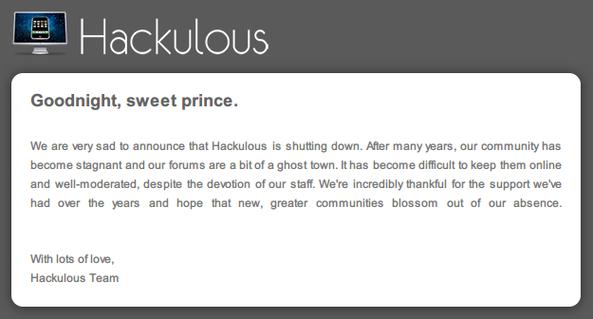 I dont have an iPhone on hand, but yesterday one of my friends tell me that he can't install some programs because the shut down of Hackulous. After some diggs, I found it's a program cracking team. It's popularly recognized the terminator of Apple apps. Below is an article by enigmax for detailed explanation about the event.

Hackulous, perhaps the Internet's most famous cracked app community, has dramatically closed its doors. The community shut down yesterday but that isn't the only damage. Apptrackr, the web-based partner index for cracked apps and Installous, the app used by millions to transfer cracked apps to their iDevices, have also been disabled. The operators cite lack of activity for the shutdown but it seems unlikely that's the only reason.

Although there are plenty of sites specializing in similar things, the Hackulous community is particularly well known among users of jailbroken Apple devices.

Aside from the community forums, Hackulous is known for its direct connections with Apptrakr, a huge web-based index of cracked apps and Installous, a clever piece of software which allows the installation of iOS software found via Apptrakr and elsewhere.

But as of yesterday, Hackulous is officially no more.

"We are very sad to announce that Hackulous is shutting down," the team said in a statement.

"After many years, our community has become stagnant and our forums are a bit of a ghost town. It has become difficult to keep them online and well-moderated, despite the devotion of our staff. We're incredibly thankful for the support we've had over the years and hope that new, greater communities blossom out of our absence."

While the announcement was made on Hackulous, it didn't mention the fate of either Apptrackr or Installous, the software that relies on Apptrackr to function.

Installous is installed on millions of Apple devices such as the iPhone and iPad and was the key way for people to transfer pirate apps to their phones and tablets. However, following the Hackulous announcement the app has been rendered completely non-functional, apparently disabled by the Hackulous team that controlled it.

TorrentFreak tried to contact Dissident, the admin of the projects, for an official statement. He has spoken with us on numerous occasions in the past (and has even guest-blogged here) but the emails bounced. It appears that for whatever reason he's preferring to keep a low profile at the moment.

We did manage to speak to two other people familiar with the sites' operations and they told us they were surprised at the decision due to a number of factors.

The sites were apparently healthy and still had plenty of users. Indeed, the shutdown statement appears to carry a contradiction – "ghost town" forums are by their very nature not particularly difficult to keep "well-moderated" since nobody uses them. Nevertheless, this is the cited reason for the shutdown.

Also, Installous was used by millions and served up ads each and every time someone carried out a key app-related action within the software. Regardless of whether the Hackulous forums were doing well or not, Hackulous was still installed on millions of machines leading to (presumably) some half-decent advertising revenue to fund the project and more. It's difficult to see why that would be terminated due to a quiet forum.

The other issue is that Dissident has always gone out of his way to say how passionately he feels about the "try before you buy" aspect of Installous and how important it is to give people a chance to taste an app before committing to a purchase. Trials are certainly more readily available officially than they were before Installous began so it's possible that Dissident thought the mission was over.

The final piece of the puzzle could come on the back of rumors that a jailbreak for iOS6 won't be forthcoming. No jailbreak for future iOSs means that Installous and indeed the completely legal Cydia can no longer function on new machines. Did this play a part in the shutdown decision? We'll need to track down Dissident to find out more.

The closures of these Hackukous projects raise more questions than they answer but will still come as a shock to those who relied on Installous for their software fix. Time to start shelling out a few cents an app it seems – luckily that's not going to break the bank.