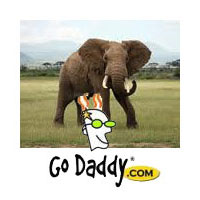 Godaddy vs the Africa elephants should be one of the most hot topics on internet. We might have estimated what kind of effect it will bring to godaddy for their CEO's action.

Maybe I should replace godaddy via godaddy ceo because it's bob parson's personal affairs, but since he's the leader of godaddy group, he's more or less equal to godaddy actually.

From a recent bob's blog post, he uploaded a video of himself hunting and killing an elephant in Zimbabwe. it made a firestorm over the internet. Here're the reason why he did this:

"I gradually became aware of the problem elephants through talking with my friends there, and the problems they were having with their fields and crops being destroyed. I was seeing people on the brink of starvation, or actually starving. So I was invited by the tribal council to participate in a problem elephant control team and that is what I did."

Why bob is wrong?

It's absolutely wrong for anybody to kill wildlife for any reason. Bob stated he killed the elephant simply because it's destroying the crops and fields in that district. So should the elephant be killed? Can't people give some more space to animals or set up fences to keep space with them?

Bob said he spent around $60,000 ~ $70,000 to this journey, so he said he has no money to donate the elephant protection program. What a lie, his travel fees would be a big donate to deal with human-wildlife conflict but he never done so. What's worse is he even make the hunting story a video and uploaded to personal blog but never say sorry about his work. Here's the video he uploaded:

Think about the killed elephant and any other animals killed by our people, shouldn't we feel sorry for what we did? Save your money and stop paying to this company if you think they're doing wrong as well.

Godaddy founder – Bob parsons, survival from the Vetnam war in US Army and setup godaddy after return to US. His story is a legend in the industry, his name and  company is always respected by people. Godaddy's main business is domain registration and web hosting. Till present, godaddy is the world's largest domain registrar, the number of domain registration is uprising per second.

Note: Namecheap, a leading domain registrar based in Los Angeles, announced to donate to Save the Elephants in Response to GoDaddy Elephant Hunt.