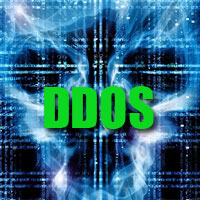 In short definition, a distributed denial-of-service attack (DDoS attack) is an attempt to make a computer resource unavailable to its intended users. During a DDOS attack your website may become unreachable since the server is being flooded with bogus requests and cannot process the valid ones. The purpose of ddos attack is to put down your service, your server and data are still in security.

As long as your website is online you will need to care about uptime end security. A Ddos attack protected hosting service is really needed if you're running a business site that requires extremely high online rates.

For anti-ddos attack purpose, you have to support your hosting server via leading datacenter service that's backend with powerful hardware/network equipments. There're several Excellent datacenters on the globe who is famous for ddos protection and high performance. The most popular one would be softlayer.

Softlayer – Softlayer is composed by multiple datacenters in USA including theplanet which is the most famous one before merging into SL. Softlayer is also the biggest datacenter in the world. Their most popular datacenters location for anti-ddos attack includes Dallas and Houston. The two DCs are actually the main network backbone of several big hosting companies such as Hostgator & Arvixe. To deal with ddos attack, softlayer is equipped with following advantages

In order to deal with ddos attack, SL setup very complex management structure over hosting servers and networking. They do everything they can to lessen the impact on their service and try to speed up propagation as much as possible.

You can also check out the TOP datacenter list for other popular datacenters with ddosk attack protected.

How do they protect their server besides the datacenter advantages? They actually configured side by side protection from both hardware and software level besides datacenter specs. Their basic configuration includes the following

Their server and network admin are monitoring all servers from datacenters directly to ensure there will be quick response in case attacking happend.

Ddos attack is to send numorous requests to server and create high traffic to lead it down. By understanding this we learned that the only method to deal with the attack is to prepare a lot of servers and bandwidth to balance the bad traffic and finally protected the production server. However since it will require many physical equipments to deal with the attck, it's not quite possible for a small company for monetary and technical reasons. When ddos attack comes, they have no good ways but to shutdown servers directly.

Of course, since there're ways of attack, the solutions are always more. In order to protect your server not to be affected by ddos attack, you must find the right ISP who has enough resources to drive away the attack. Once a DDos attack is detected and confirmed by the Network Operations Center they will have the service to reroute the bad traffic to the ddos protection system but allows the legitimate traffic to continue to its original destination. When the attack has subsided, the original direct path between the destination and the rest of the Internet is restored.