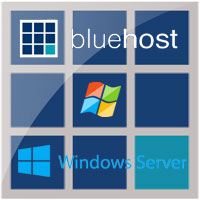 After many years support for linux server, bluehost opened their first windows hosting plan! However, not for English users but only available to Asia district people. If you can not wait to see what's being offered there and if it's valuable to deal with, let's review side by side of the plan features, server specs, networking, support and every available offers.

Currently, windows hosting service is offered via shared & reseller hosting plans, for level plans for each. Unlike the popular unlimited offer, every hosting plan is restricted with specific limitation. Because of this, users can select the proper plan with reasonable price. Hosting plan details are provided as following:

Windows server 2008 is main flow in Asia especially in China. Many people actually still use Asp applications for windows hosting thus this server platform is sufficient enough to support customer requirements. Especially when bluehost windows server is compatible with both .net & php technologies, clients get more selections among lots of oversold virtual servers.

Bluehost China provides two Datacenter options to clients – HK and US. For US data centers, they're all about Utah servers which is fully managed by the company itself. Also, since bluehost is one of EIG brand, it's connected to multiple other datacenters over the country for CDN service. If your targeted users from USA then their good price and service is powerful backend of your business.

Bluehost China support is located in Xiamen, Fujian province. Live support via tencent QQ and hotline. helpdesk ticket is also standard offer as bluehost US. The difference is their Chinese live support is only available during business hours at the moment.

How do We Think?

Technically speaking, the bluehost windows hosting service is more clean comparing to many local chinese hosting providers. Bluehost got lots of advantages in server managing and networking. It will bring positive influence to the overall industry competition and improve its service quality. Actually, bluehost and its partner brand "Hostgator China" are both configured in this way. It's positive to see rapid growth for their business in this area and very likely they will launch windows plans for bluehost US site.