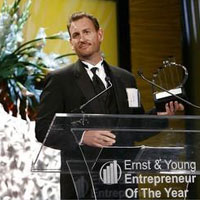 Matt Heaton left home when 19 years old and served as a missionary for church in middle and southern Taiwan.

Within that special periods he learnt how to communicate with people on a regular basis and win friends with different languages speaking and learnt how to start a successful business in his later life.

More details about his Chinese experience can be found at this blog page.

Bluehost is a success from it's born. Actually from the bluehost early times, Hosting business already a pretty mature business in US so a new host always got difficulty to make further success. But bluehost did the trick and grow up quickly for excellent human kind service.

Unlimited disk space, unlimited bandwidth. Yes, bluehost is one of the first hostings who announced to offer the unlimited services! Bluehost got a great ammount of rewards within 3 years. The fantastic support plus excellent hosting features quickly promote bluehost to the business top leader. No matter in the past 10 years or nowadays, when people mentioned bluehost, NO.1 is always the first impression.

I have to say, Matt Heaton made a successful business, it's quite rare who can running 2 successful and respected names at the same time in hosting industry. If you check the page rank and alexa rank for both bluehost and hostmonster, you can easily find there's no one else who managed to get so high. Their rank simply based on their continuing hard efforts and human kind support to their loyal clients.

UPDATE: Bluehost & Hostmonster have merged into EIG group. Being the founder of BL and HM, Matt Heaton is now powering another brand called "BeterLinux" which is optimized linux OS to fulfill hosting server requirements.