SOPA and PIPA are hot names recently because of it might lead serious internet problems and being opposed by many popular internet groups like Google, Facebook, Wikipedia etc since January 18th. These websites are either blocking their home pages or edit logos to protest such law. If you would like to join this campaign on your website but not sure how, the sopablackout.org website even provided the detailed technical steps on their home page.

SOPA (short for Stop Online Piracy Act) is coming out to deal with online privacy. The law proposes to expand the legal authority of US law enforcement and copyright holders. While it's original intension is good, however if this law is passed, some internet giants like Google, Youtube and Facebook etc are heavily affected. The actually bad is it will devastate the online economy and the overall internet freedom.

PIPA (shot for Protect IP Act) is similar to SOPA. To understand it in short words, it's to shutdown websites that have pirated materials no matter how does such material got uploaded. The copyright holder can seize the domain in extreme circumstances.

There's no problemto protect copyrighted stuff and quite important for every oneline business. I have to admit the SOPA law has good intensions at the very beginning, however it will simply override the current DMCA rules which would give a "safe harbor" provision to reported websites. If it's passed, it will shutdown millions of online jobs and put most business offline to avoid lawsuits in the USA. Because  of this, the law is being opposed by most online groups like google actions. Except all critisism, this law is being supported by leading giants in Music and Movie companies. 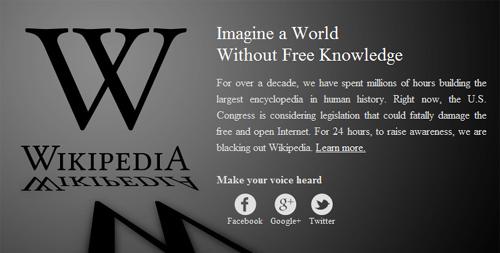