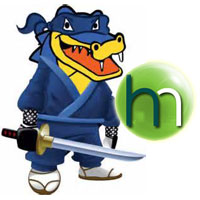 This hostgator and hostmonster comparison is based our editorial experience and live user experience. We compare the two web hosts side by side for both advantages and weakness. If you're hesitating about which one to use and looking for comparison of hostgator and hostmonster, you got the right place for the information you needed. We will tell you by true user experience about which host to go for different website requirements.

Here we're going to compare the most essential features for web hosting service and check out who does better with different website requirements.

Pricing — While you need to pay $3.95/mon for "All in one" service from hostmonster with unlimited hosting support, you have the option to pay only $3.96/mon from hostgator by limited support. If you do not have enough budget for high quality service, hostmonstor is better choice since you can save half money. Especially when there's a free domain included for hostmonster while hostgator does not offer.

Networking — Hostgator is based on Softlayer datacenter which is the largest one in US (hostgator is actually the biggest customer of softlayer), however hostmonster servers are powered by four world class datacenters to ensure 100% uptime. Their founder even setup their own datacenters in 2011 and open for renting. After merged in to endurance. their hosting servers are partially moved to endurance data centers for better service evaluation.

Over the past two years monitoring and tests, their networking has been kept stable on the line. Endurance has a very professional IT group for server and network management, Their people setup high grade automation for side by side control of the system. Any outage or system error will be sent to people in charge instantly. That's how we can't see too much complaints to this group in recent years.

Hosting features — They both are offering 100% standard linux cpanel hosting with unlimited disk space & bandwidth. The main difference is on the number of domains you can host. For hostgator $3.96/mon plan you can only host one domain name and you can't park additional domains either, but you can add/host unlimited with hostmonster. So if you have multiple domains to be hosted, hostmonster would be better choice to save your money.

Hosting plans — Hostgator configured 3 different shared hosting plans and multiple VPS/dedicated server hosting solutions to meet your different requirements. Both windows and linux hosting plans are offered by hostgator with pretty standard management. If you would like to pay monthly with a higher price, it's also welcomed. With hostmonster you have a single linux option with all in one service included. Since from 2014, hostmonster started to offer VPS and dedicated server plans which is same configuration of bluehost. The server provides cloud based instant provisioning upon order confirmation.

Server Uptime — Because they both are powered by world class datacenter and network backbones, hostgator and hostmonster be able to offer honest 99% server uptime. Also, since the both services are managed by same owner currently, you won't see too much difference on performance.From editorial live testing and monitoring, the average uptime stats reached 99.97% over 3 months.

Customer support — Hostgator and hostmonster are both supported 24×7 by live chat, email and phone call. Ticket support is also available for complex issues fixing. Although they're under the same group at the moment, their support are still handled by old team that you can trust as always.

How do we think about the two webhosts?

Both hostgator and hostmonster are respected names in the industry and they both are named using monster names. They are actually performing exact the same as their name saying — the monsters in business. For huge daily sign ups, they're definitely worthy of dealing with.

So basically, if you need top level service with affordable hosting plan, hostgator is better choice, you can even save 30% by following this hostgator 30% off coupon!

If you like to host multiple websites under a single hosting plan by less money, hostmonster is your right choice.