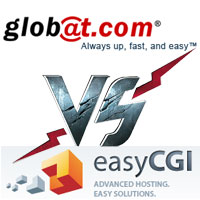 Globat vs Easycgi, which is better hosting? It might be a little strange to compare the two web hosts since they're not as hot as they were before. But the comparison is quite helpful to start users. Especially when you're not sure which host to work with while they provide similar technicial features.

Globat setup their web hosting business since 2001 in Los Angeles and quickly became a well known brand in this industry by offerring reliable and affordable hosting plans. I think people who have experience with globat in the earliest times would be proud of the services. Every hosting brands are trying their best to serve clients from each side, their earliest times are always outstanding comparing to many concurrent competitors. Globat's business got roburst under thoese guy's hard work, served clients grow from 0 to 100,000 worldwide and became one of the majoy hosts at that time.

But things got changed in year 2009 after acquired by EIG, their service got most complaints for unstable server and downtime everyday.  If we read the next stories of EIG we will find that globat plays exactly the same as webhost4life. same level hosting services and the same results after several year's improvement.

Whenever we mention easycgi this name, many people would miss its golden times in web hosting. Yes that's true, easycgi is absolutely a hot name before year 2008. It's honored for its great technology support and reliable platform by webmasters who host international business websites. Easycgi offered side by side support to this area including optimized hosting server and bandwidth, promotional hosting features and affordable hosting plans. If you were looking for microsoft technologies side by side support, easycgi is definitely one of your best choice.

However, what we're talking about is it's old times not at the moment. If you ask us if easycgi is a recommended hosting we'll answer without hesitation "No". it seems easycgi messed up everything after acquired by EIG and their name is funlly renamed to "hardcgi" by webmasters. We don't know why but it's the truth, easycgi is a nightmare to many people.

Globat and Easycgi, who do you like? Do you have to choose between these two hosts? The only difference between them is globat offers linux hosting plan while easycgi only offers windows hosting plan from shared hosting. After merged into the same provider, their servers and support etc are on same platform. Honestly speaking, except for some technical support difference, everything else is the same. If you're hesitate between these two hosts, congratulations! you have the time to find another hosting provider!

There're over half hundred web hosting brands under EIG company and surely the number is increasing every after some periods. We're not sure why this company be able to keep up the excellent services under some hosting brands like Ipage and Fatcow but failed to do so from most other ones.

After some comparison we found as long as the previous hosting company is a pure unix/linux service provider then there will be no much turbulance after acquisition, but if it's a windows based hosting service, everything will get messed up. After checking from internet and their customer feedbacks, most of their complaints are from windows hosting clients. We get the simple conclusion, EIG is only good at linux technologies but failed to offer windows hosting service. that's why many well-know hosting brands got destroyed after merged to this company.

Their purchase of other hosting will never stop, as long as you're dealing with a windows hosting service you should prepare to find a new host if your current service provider is not really strong enough.

Who to choose beyond EIG brands?

Looking at the hosting industry you will find that new hosting names are born every day but big hosting companies are less and less. To avoid the stories of many people who dealed with EIG, you really should select your web hosting provider from the TOP list, at least eig will pay more attentions when the host is finally got sold. Who they're? Arvixe and Hostgator are our top recommended TOP webhosts.

Visit www.Arvixe.com to check hosting plans. Read this page about arvixe 30% Off coupon!