Both bluehost and hostmonster are recognized excellent hosting providers and lots of webmasters list they two in TOP recommendation list. Their hosting packages help businesses and individuals get high-powered service at a fraction of the cost. Many people have difficulty in choosing between these two hosts, which one is better?

One of the most reputable names from web hosting business and serves millions global websites. Since 1996, bluehost has been standard choice for rich feature linux hosting service with affordable price. Bluehost has built their own data center facilities in Utah. After 15 years in offering a single shared hosting solution, bluehost starts to offer cloud VPS and dedicated server plans based its powerful hardware resources and technical supports.

HostMonster was created in 1999, 3 years after bluehost birth. Hostmonster is almost 100% replicated from bluehost for either plan features and website structures. Surprisely, it replicated the success too! Hostmonster is recommended together with bluehost whenever people require affordable and reliable linux hosting service.

About hosting features, bluehost and hostmonster provide the same feature shared hosting plan. They're actually the very first service to offer shell access under shared server. Screenshot of the two hosts' advantages as below 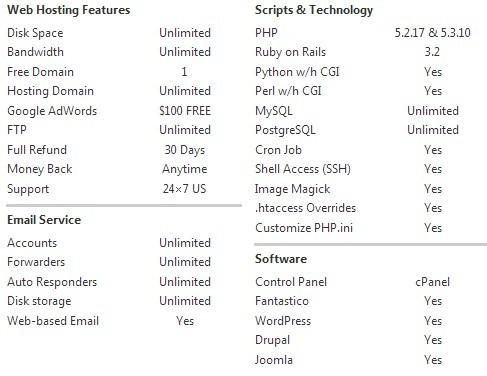 As we see, both HostMonster and BlueHost provide unlimited disk space, data transfer and email accounts.  Plus, they each provide a free domain name registration and allows clients to host unlimited websites.

However, bluehost provides multiple upgrade options to cloud vps & dedicated server while such services are not available from hostmonster. Because of this, in case our website grows up with higher hosting requirements, we have to switch service. But we can get seamless upgrade under bluehost.

Bluehost ultilize betterlinux technologies which is developped by Matt heaton new company. Also, bluehost is now fully cloud based for fast response while there's no news from hostmonster. Especially with bluehost VPS service, their leading cloud technologies automated everything for better hosting management. With regarding to security, client can get instant alert from management center in case any suspicious action.

Actually the two hosts are supported by the same team. However, bluehost provides more support to people from different corners in the world. Currently, bluehost operates two support centers in China & India. They even developped local hosting plans to meet their different server requirements such as windows hosting plans. Such features are not available from hostmonster site.

Certainly, it's for shared hosting price. Bluehost provide promotional price at $3.95/mo while it's default offer on hostmonster site. Same hosting feature should result in same costs, especially when they're operated by the same group.

More about Hostmonster and bluehost

BlueHost and HostMonster are the sister brands, founded by "Matt heaton" in 1996/1999, operated with the same staffs, data centers, servers, support system and technology.  Matt is also operating another company called "fastdomain". They are the only 2 shared web hosting providers having 3 dedicated data centers in Provo, Utah that have invested 20+ million USD since 2010. They are the really leaders of shared web hosting industry today.

Extremely reliable server
Matt heaton is a server core developer himself and his team never stopped optimizing the server by ongoing testing. The company is handling multiple projects regarding to server improvements. Time has proven they are making good use of the technology, the shared hosting has almost zero down time and this really amazing.

SSH Shell Access
Bluehost & hostmonster are the very first service who can provide people shell access under shared hosting. In early times, it's big challenge because a little mistake can bring disaster to entire environment.

Anytime money back guarantee
You can always ask for a refund when you are unhappy with the services, no questions to be asked. Because of this, their service is 100% worry free. Clients and their data are in safe hand.

Bluehost & Hostmonster were merged into EIG group in 2013 and their founder no longer in that company. Instead, he started a new group with new product called "BetterLinux" which was showed in hosting con 2012. However, don't treat BH and HM as crappy brands just because they were sold to endurance, actually they got huge improvements after business transition. For example their support staff almost increased half than before. More affordable hosting plans are also being offered if you ever liked their service.

But who to choose between the two? If you're looking for a reliable shared web hosting provider, Both BlueHost and HostMonster are perfect choice, But for scalability and platform consideration, bluehost is much better choice, especially when you need upgrade in the future.