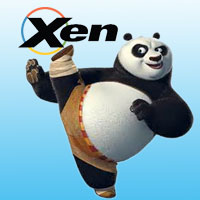 XEN is open sourced vertualization platform and management system, it's also the only available opensource type-1 program for the moment. Administrators be able to run multiple operation systems concurrently, thus it's used in lots of commercial or open source projects such as: Server virtualization, Infrastructure as a Service, Desktop virtualization, Security applications, Embedded and hardware appliances etc. Xen is powering the biggest cloud computing market.

Xen support two kinds of virtualization: PV & HVM, both virtualization can be running on same XEN server. Moreover, PV can be used within HVM virtual server which is popularly named "PV on HVM". What would be the difference between PV and HVM for XEN virtualization?

To improve performance, HVM can also use some special PV drivers (PVHVM or PV-on-HVM). These PV drivers optimize HVM environment and do balance to hard disk & network IO. In this way you get similar or better virtual server than PV. Because of this, you can optimize operation system that only support full virtualization technology, such as windows.

For high quality vps server, virtualization platform is only one concern among many features like maintenance plan, server hardware specifications, network capability and support availability etc.. Hosting provider be able to setup the worst server system even on best virtualization platform. Thus, we have to review side by side and choose the best to fulfill our needs. For quick guidance, here's a handful of reputable providers to review on vps hosting page.