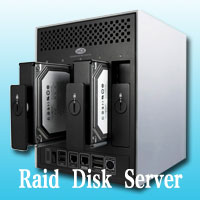 What type disk raid is best for hosting server? I recently got such question from one client because he cares about server performance a lot. Different hosting providers advertise different server configurations. Some tells the exact server structures and some just blow off by vague words. In this article let's check out the most popular server disk setup then find which type is best to power a business site.

Short of redundant array of independent disks, is a type of server disk setup solution to increase single volum storage size and improve performance. The most popular name SAN is completely created from RAID disk. Generally, there're Raid 0~10 and Raid 50 available. For hosting servers it's normally setup on Raid 5 or Raid 10. Some hosting providers also offer Raid 50. We'll compare Raid0, Raid 1, Raid5 and Raid 10 that have been used by hosting servers. 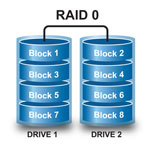 The most basic and simple RAID setup that only requires two hard drives. RAID 0 implements a striped disk array, the data is broken down into blocks and each block is written to a separate disk drive. The most advantage of RAID 0 is I/O performance is greatly improved by spreading the I/O load across many channels and drives.

Disadvantages: Because its not fault-tolerant, the failure of just one drive will result in all data loss in RAID 0 array. For servers that require high performance as well as high availability, RAID 0 should never be used. 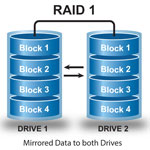 More advanced setup than RAID 0. Besides all advantages from RAID 0, RAID 1 is 100% redundancy setup to make sure all data safety. In case of a disk failure, it will make a copy to the replacement disk for fast recovery. From production testing, RAID 1 read speed is twice of single disk so performance is greatly improved.

The big disadvantage of RAID 1 is the cost. Because it will copy data from one drive to another thus the overal storage is not increased at all. Also, RAID 1 is mainly done by system softwares thus it adds more loading of server CPU/RAM etc and the server overall performance is affected.

An advanced and one of the most popular RAID solution. It's widely used for high performance and data redundancy. This RAID level provides the highest read data transaction rate and low ratio of ECC (Parity) disks to data disks. RAID 5 transfer rate and efficiency is the best comparing to any previous RAID solution.

Although there're lots of unbeatable advantages for RAID 5 system, it has the most complex controller design which makes it difficult to rebuild in the event of a disk failure (as compared toRAID level 1). Individual block data transfer rate is the same as single disk.

RAID 10. Stripe of Mirrors/Mirror of Stripes

A RAID subsystem that increases safety by writing the same data on two drives (mirroring), while increasing speed by interleaving data across two or more mirrored "virtual" drives (striping). RAID 10 provides the most security and speed but uses more drives. RAID 10 can be understood in two ways: RAID 1+0 and RAID 0+1. That means the setup is combination of Raid 0 and Raid 1. That's how max speed and security produced.

There's another RAID solution gaining more popularity called RAID 50(Combination of Raid 5 and Raid 0). There's hot discussion about which is better. Actually, both are good solutions but you must evaluate carefully about what kind of files you store on server. There's a good article about RAID 10 and RAID 50 comparison. The following chart clearly shows the main difference.

As we see, RAID 10 provides better security and performance with regarding to web hosting service. The only negative in using RAID 10 is only 50% drives capacity is usable due to mirroring. But there's no such limitation from RAID 50.

RAID 10 is better choice if we're looking for high performance hosting service. It's also configured by most leading server hosting providers like Inmotion and Arvixe. It's highly suggested brands for business hosting purpose. Their standard management system and high performance service simply made half your business success!