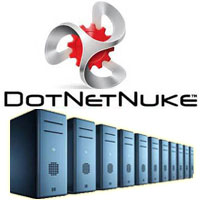 Dotnetnuke is the most popular asp.net CMS system. For it's simple structure and large support communities, dotnetnuke is being used by thousands of personal and enterprise web applications. Since dotnetnuke is so popular, choosing the right dotnetnuke hosting is quite important to ensure your website always online. Here we'll discuss dotnetnuke side by side requirements for hosting server and compare the top dotnetnuke hosting providers.

We have dealt with multiple Asp.net hosting companies and the following are selected in top list if you're looking for qualifying dotnetnuke hosting: Winhost, Hostgator, powerdnn, Arvixe.

They all provide the latest windows server and sql server versions on the market and be capable offerring affordable hosting plans. Take a quick look of their general hosting features

Among these reputable dnn hosting providers, arvixe, winhost and hostgator are traditional web hosting leader with multiple hosting solutions. Users be able to manage all service centrally from hosting control panel. So you have total control of website stuff and know how it works exactly.

For powerdnn(now managed.com), it's more about a hosted service other than common hosting service. It's dedicated for DNN software. Their service is all about dotnetnuke, they provide dnn installation, security, skin/module installation and every side support. What customer get is dnn host login and powerdnn team manage everything else for you like daily maintenance and software upgrade etc. The result is we pay relatively high monthly fee in order to enjoy the worry free service.

As we see, although all above hosting be able to offer excellent dotnetnuke hosting services but they have different advantages. Especially for powerdnn, because of its expensive service, it's only good choice if you run a big site and you don't want to manage server service by yourself. If you have tight budget and be able to manage website well by your own, the other three hosts is perfect choice.

Before choosing the right dotnetnuke hosting, we should firstly know who's using this software mostly and then decide what they really need. Generally speaking, dotnetnuke is being used by follow groups.

As for dotnetnuke module developers, most of them are commercial purpose and act as regular users, the difference is they know more about what they really need. By programming their project they know what's required in order to use the final products.

Dotnetnuke Skinner — This group is also mainly commercial based, most of them are familiar with web design especially CSS part in order to produce a nice looking website.

Web developer — The web developers play a big role in dotnetnuke. Of course, it's referring to Asp.net web developers. because Dotnetnuke always catch up with the latest Asp.net technologies and frameworks, it's a good sample if you want to destribute a secure and professional website. Web developers are always good at programming and know a bit more on server system so they can find the actual webhosts which will be suitable for their projects.

Website users — Here we're referring to people who want to put up a nice website but with little knowledge in coding. Dotnetnuke definitely provides a good platform to meet their requirements, By adding or removing modules you can compose a professional website easily via dotnetnuke. But this group people almost have no knowledge on hosting stuff so they're the real persons who need qualifying suggestions from other people.

How to Choose the Best Dotnetnuke Hosting Service?

As you check from dotnetnuke official documentation, the dotnetnuke requirements are very few. IIS, Asp.net 3.5 SP1+, SQL Server 2005+. As long as the hosting be able to offer these features there would be no problem to support dotnetnuke. But several things you need to consider when choosing the qualifying hosting provider.

B. SQL Server specifications — Sql server must be seperated from web servers to ensure the site performance and server health. Sql server 2005 is the minimum requirement for nowadays technologies, of course sql server 2008 is the best choice.

Based on above specifications, you can expect 99% uptime at least. so you can always follow above rules to find the qualifying dotnetnuke hosting provider.