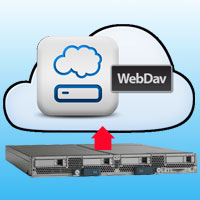 Webdav is a http protocol which let you map the remote server space to your local disk drive. You can easily manage your website files just like on your local computer disk partion. Webdav simplifed the process of website deployment.

There're not so many web hosting service be able to support a subset of WebDAV. Till present, the best web hosts with webdav supported are hostgator and arvixe.

How is webdav supported?

Webdav is supported by both windows and linux server, but for many issues, webdav on windows IIS is not offered by all majoy hosts, it's mostly used on linux or unix like system. With a standard cpanel hosting server, webdav is enabled by default, you can easily manage it via regular user login.

How to enable webdav in cpanel?

1. Login to cPanel and click the Web Disk icon.
2. Scroll down and click the Access Web Disk button.
3. Choose your operating system (the one you use on your personal computer).
4. Scroll down and hit the Go button.
5. Click the Save button.
6. On your computer, hit Save, Open, and Run.
7. You are now viewing website files from your personal computer.

If you would like to take webdav advantages from IIS hosting service, arvixe be able to enable for your account as well. If not, just contact support and they will do needful assistance.

Webdav vs FTP vs remote iis manager, which is better?

Technically speaking, webdav, remote iis manager and ftp are all doing the same work – "website management". Not sure which is the best solution?. Well, they're not completely doing the same work. Webdav and FTP are mainly configured for file transfer. Remote IIS manager is only available for windows server and configured for IIS service management other than file transfer. Let's take a look from below about webdav and ftp comparison.

1. Ftp requires ftp server to work with and you  have to create user credentials seprately on your server system, but webdav is another story, webdav has it's own secre authentication protocol without any additional system user accounts.

2. Security – You have to configure many settings in order to use secure ftp because it's completely plain text transfer as default. But you can simply use https directly for webdav file transfer, it saved a lot of time for server admin or webmasters.

4. Ftp always got blocked by some kinds of firewall, but webdav hardly got into such issues since it's http protocol based.

5. You have to use third party ftp software in order to ftping. With webdav you only open the connection just double clicking the virtual disk mapping then you can drag and drop files between the remote server and your local computer. Webdav is definitely more convenient than ftp.

Conclusion: If you have the chance to use webdav, you will find it's more professional than ftp, but please make sure your computer is protected to avoid potential abuse and virus attack because your hosting space will be mapped to your computer directly.