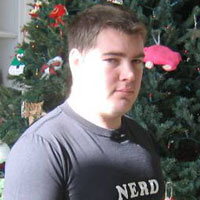 Brent Oxley – the founder and CEO of hostgator, his story and experience is absolutely helpful to any entrepreneur who like to start a successful business.

When Brent is still a student, he got the idea to sell banners on websites and wish millions in return but the truth approved it's unsuccessful. The chance for brent to start hosting business only because he wanted to sell the extra free space on server and only wish several dollars bonus in return. From what he said in talk, he even didn't know what hosting is but just want to sell some space to support the server renewal.

His later experience approved the choice is correct, with his successful marketing and most profitable reseller program, hostgator growup shortly after the setup and it's a highly respected brand in the industry nowadays. From the interview to brent we learnt how important to choose and persist on your aim. As long as you determined to do something, make a plan and follow it strictly every day. You won't be regret for any hard times from the start.

Hostgator never stopped improving, they started to offer windows hosting in 2011 and approved to be a successful service from editors' review. It's a must if hostgator want's to become the largest hosting provider since there's still a big range clients who prefer to windows. Hostgator's growth is by word-of-mouth and they put a huge enphasis on customer service thus I believe their windows hosting will be another success due to their team's hard working and reliable customer support.

He also managed another hosting brand called asmallorange which is a more and more name from hosting. Launchpad.com will be Brent's next big venture and will be a domain registrar that sells hosting, SSLs, and many other services at a discount. The plan is to invest over a million dollars per month into advertising as soon as this brand is launched in order to compete directly with GoDaddy.

However, since hostgator got acquired by EIG in 2012, all business under HG seems sold as well. EIG has been more and more smart and the business deal did not cause any service failure like they did from many other brands. Everything under hostgator is running as it was just like nothing happend there. We just hope they can keep up with the stableness in long term.

One thought on “Hostgator CEO Profiles”